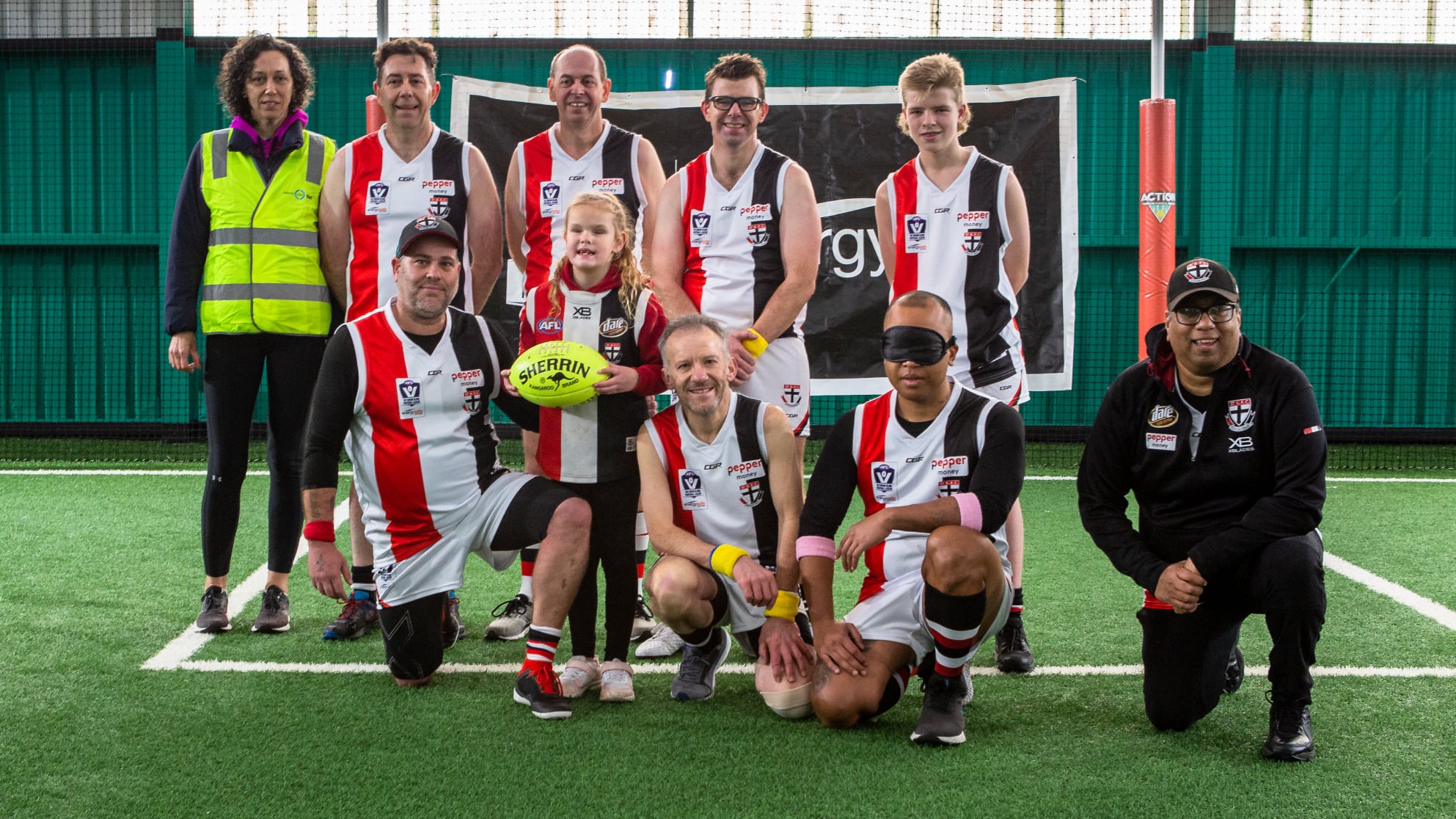 St Kilda Captain, Lawrence Raja (far right) and the St Kilda VBFL team pose for a photo ahead of their match.

Football will return this weekend with the resumption of the 2021 Energy Safe Victorian Blind Football League season.

Only two rounds were completed before the season was put on hold, and the remaining games will be played over an action packed month of competition which will conclude with the Grand Final to be played on Saturday the 4th of December.

*All games will be played at Action Indoor Sports Centre, Tullamarine.

In anticipation of the return to competitive competition, we caught up with Lawrence Raja and Bridget Jolley who are two of the game's biggest advocates and the respective leaders of the St Kilda and Bombers ESV VBFL teams.

Lawrence and Bridget share a bit about themselves, the game of AFL Blind, and their excitement for the return of the season.

Check out their responses below:

Can you tell us about yourself and what you do outside of football?

Bridget Jolley: “I’m 35 and live in Footscray, and I grew up in Melbourne. I work within disability advocacy for an organisation called Women With Disabilities Victoria working on empowerment and leadership around gender and disability. I also work for the Youth Disability Advocacy Service where I run workshops around access and inclusion for people who work within the youth sector. I’m a very big footy fan. I’m a Geelong member and I’m also a member of the Bulldogs Women’s team so when the footy is on I’m often going.”

Lawrence Raja: “I am a proud father of an amazing daughter—and an amazing son-in-law now as well—and beside football, I’m currently learning how to do sports photography. I have a sound engineer background and I like to delve into mixing sound and recording music events. I enjoy cooking — I can’t see much, so sometimes it’s good, sometimes it’s no good but overall it’s okay.”

Can you tell us about your vision impairment and in what way this affects your everyday life?

BJ: “My eye condition is genetic—it’s called Aniridia—so my Mum has that condition and quite a few people within her side of the family. It causes low vision. My Dad is totally blind and quite a few members in his family are also blind and vision impaired. I’m quite short sighted and I don’t have any useful vision in my left eye. I get heavily affected by glare and lighting, and I have a Nystagmus which means that focusing on things can be quite hard. I don’t drive. And for things like work and my phone, I use a screen magnification software or settings to make things easier. If I go to the footy I’ll use a monocular and I’ll use a radio and I can also use that monocular when I’m out and about at, for example, the train station or a café.”

LR: “I was diagnosed with Diabetic Retinothapy which led to total blindness in my left eye and advance glaucoma in my right eye which is pretty low vision. I find it hard to balance and I find it hard to perceive the distance that things are at, so if I’m trying to catch a ball I have no idea how far or close to me it is — if I mark the ball it’s a fluke! Doing normal and everyday things in life takes a little bit of extra effort and concentration to get things done.”

How did you become involved in AFL Blind?

BJ: “One of the blind sports pages that I follow said that the AFL is looking at establishing a league for the vision impaired and that they were doing some trials, so I registered to be part of that trial—I was very excited that it was coming in. One of the things I was a bit hesistant about was knowing that they would have to adapt a lot of things and having concerns that would lose the spirit of the game, but I think they’ve got a good balance between a game that is for the blind and vision impaired but also you can tell it’s Aussie Rules.”

LR: “I saw an article in the Vision Australia Newsletter, and I emailed the AFL and said I’d love to be involved and I ended up getting accepted for the first trial day in December 2017. My journey began when I was a pretty sick person. I have kidney failure and my vision was bad. Current North Melbourne VFLW coach, Stephanie Binder was in a role as an exercise physio, and she helped me a lot in the early days and worked with me for a couple of years to get me ready to play AFL Blind. Having a sound engineer background, I was privileged to work on finding and creating the buzzer sound in the ball so all players can have the same ability to hear the ball and play.”

Tell us something unique about the game of AFL Blind

BJ: “There are three different classifications: A, B or C. Classifications are based off your level of vision and other disabilities as well as football skills. Typically someone who is totally blind or plays blindfolded would be classified as an A and then it depends on the other [factors] as to whether you’re a B or a C. You have a certain number of As, Bs and Cs on the ground at a time. There are slightly different rules around marking and scoring for those players. For example, if you kick a goal as an A player, it’s worth 12 points. As a B player it’s nine and a C player it’s six.”

LR: “The game is played indoors on a 60x30m field with 15m arcs which are used as scoring zones. There are 6 players on each team: 2 backs, 2 midfielders and 2 forwards. The game is modified for the vision impaired — there is a buzzer in the ball, there’s lights at the back of the goals and when you enter the goal scoring zones there is an alert for the players. There’s a basketball type tip off at the centre of the ground and there’s guides on the team for some of the players with verbal instructions. There’s lots of small variations, but the whole concept was to keep it as close to Australian Rules Football as possible without taking away too much with modifications and I think the AFL and AFL Victoria have done a tremendous job in that regards.

What type of player are you?

BJ: “I’m a category B player, and I typically play in defense.”

LR: “I’m a category B player. I have some vision and I could be better with my physical fitness, but I kick the ball all right. I tend to play full back.”

What do you enjoy most about the game?

BJ: “I really love footy, so being able to play it is really great. I really like the team aspect of it and that it involves different players and what they can offer. With the VBFL, we are still in our infancy, and you obviously go out and play and want to win, but there is a good community vibe around it and people support each other and recognise that we all have different backgrounds. It’s an opportunity to build our own football community that is for us and is also designed by us.”

LR: “I’ve learnt over the years that programs [like AFL Blind] bring people together, but it’s more about the people than the program. So my favourite part—beside playing the game and having a kick of the footy—is meeting the other people and socialising with people who have the same interests and who have faced the same challenges in life and vision impairments.”

How excited are you for the return of the AFL Blind season and how do you see the rest of the season playing out?

BJ: “We only played two rounds and it will be difficult to tell. A big impact will be availability. We are a state based league, and people travel from Bendigo, Geelong, Mornington and other places and we don’t drive so sometimes it depends on availability. I think the Grand Final might be Bulldogs versus Hawthorn.

LR: “I’m very excited. I’m a proud captain of the St Kilda Football Club Blind Football team and I think we have a decent team this year so I’m looking forward to getting out there with the players and continuing the good start we made to the season. It’s one game at a time, but if we play to our best, we will do very well this season.”

What would be your advice to someone who is facing the challenges of vison impairment and thinking about getting involved in AFL Blind or other sports?

BJ: “It’s a lot fun and it’s great for health and fitness not just on the physical side but also on the mental health side. The people who play are very welcoming. We have come-and-try days before the season starts so you can see what it’s like before you commit. If you haven’t played before, that’s fine, lots of people hadn’t played and are doing great. We’d love to have new people come and join us!

LR: “All I can say is that despite your issues, everything that you go through that you think you can’t do anymore, you can. If you’re willing to put the work in and you have the desire, then you can achieve anything. It’s not a disability, it’s an ability to do what you can with what you have. Look at me, I’ve gone from someone who was [sick] in bed to Captain of the St Kilda Football Club! 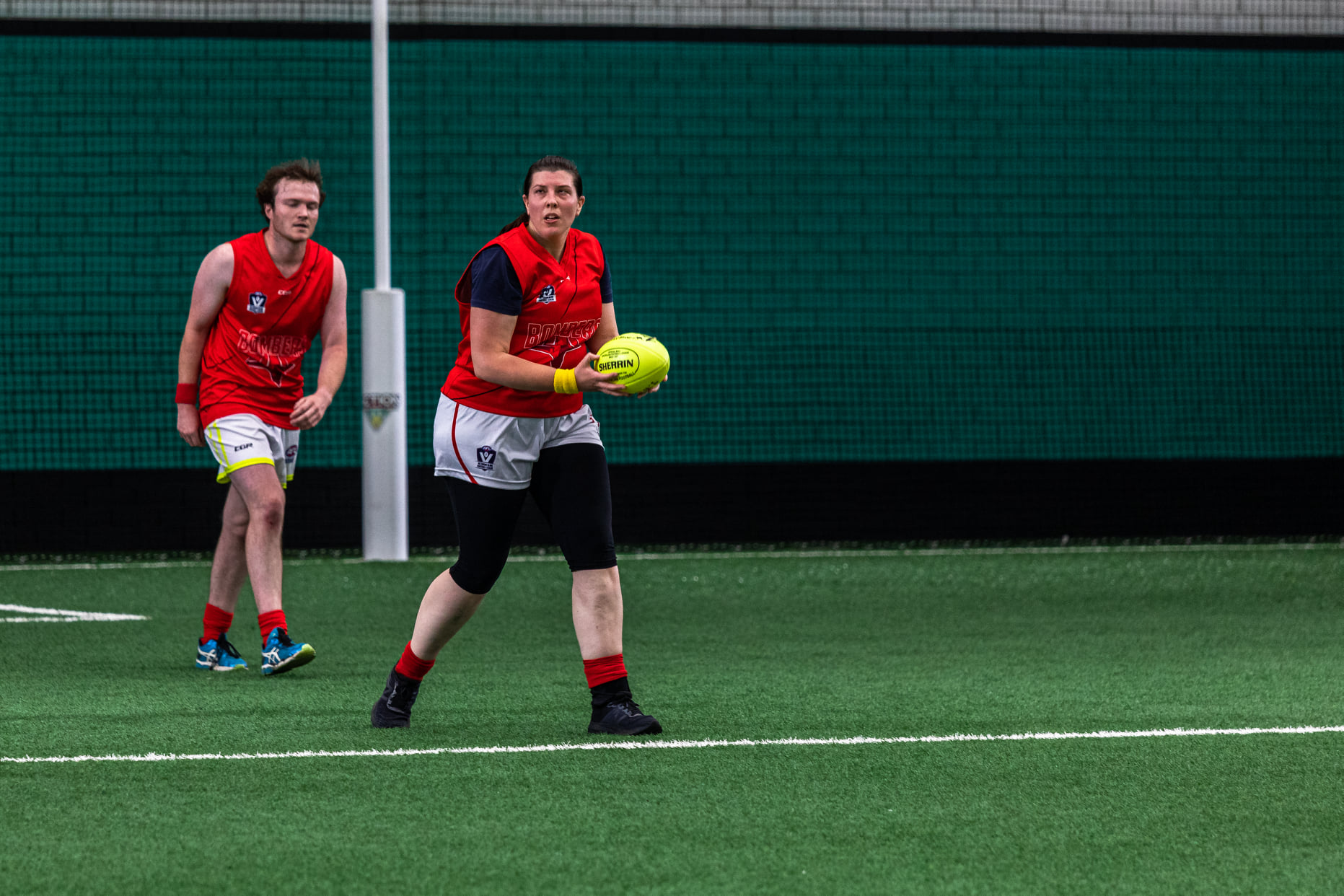 Bridget Jolley in action for the Bombers