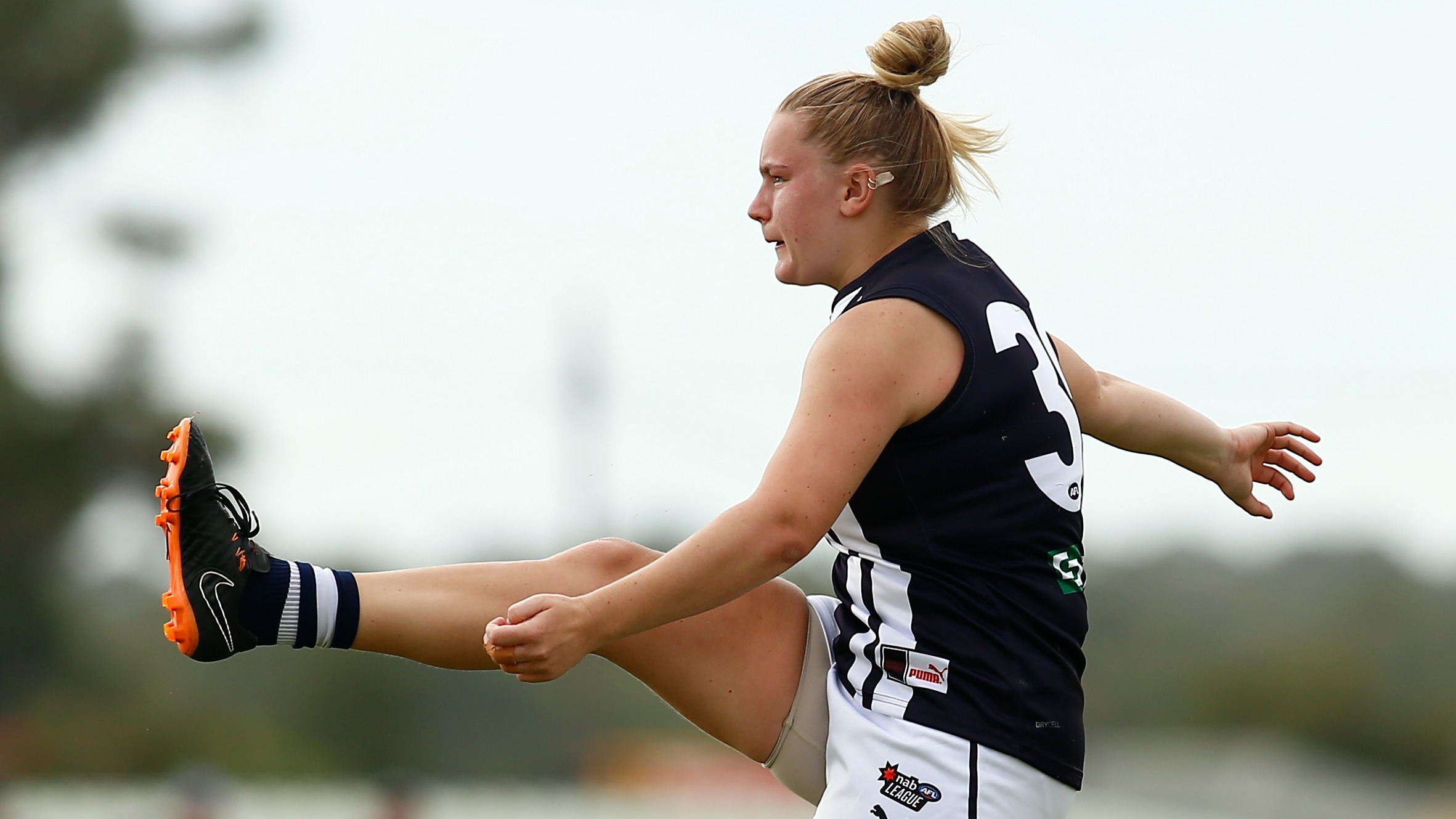 Renee Tierney is a talented young footballer who also has recently joined the AFL Corporate Affairs team on a 12-month traineeship through AFL SportsReady.

She talks about her heartbreak at missing a full season in 2020, supposed to be her top-age year in NAB League girls, the challenges associated with 2021 including being denied the chance to contest the VFLW Grand Final, and how important 2022 will be for football at all levels.

The Covid effect on football

In an unprecedented couple of years, it has been challenging for everyone to keep motivated. There’s nothing like spending your Sunday cooped up inside when you should be out there kicking goals, making a tackle, or taking a run down the wing.

With the 2020 Victorian football season cancelled there was little hope for the next Darcy Vescio to get the chance to shine. Almost no community football was played, Boys and Girls NAB League cancelled and the shutdown of the VFL & VFLW seasons meant limited to no opportunity for anyone to shine.

Consequently, 2021 has been imperative to all levels of football. The re-engagement of the AFL community has been a testament to all organisations involved in getting the game back to where it belongs.

In 2020 only three NAB League Girls games were completed before the entire season was cancelled due to the pandemic. The abandonment was detrimental to the draft class of that year. Many 18-year-olds were left with unfinished business – it being their last opportunity to showcase their talents at state level.

Many questioned what the AFL would do to compensate for the amount of game play missed. Their solution to increase the age of eligibility to 19 (years old) was a bold, but necessary, move. It allowed those undrafted to have the opportunity to play again.

There was an immense amount of anticipation to the start of the 2021 NAB League season. It was the first state league level football competition to be held in the new year and females were at the helm. After a Covid free summer and shortened pre-season, signs were positive heading into round one. Albeit, following the completion of the first game, Victoria was placed in to a snap week-long lockdown. All games were put on hold and fear was instilled into players and teams as many assumed it could be another year with no football.

However, a week or so later games resumed and the league was extremely lucky that the rest of the season remained on track with minimal disruptions. The completion of the NAB League Girls season was satisfying for many, as they were grateful to just be playing with some consistency.

Throughout periods of the NAB season and later in the year, the u19 National Carnival was also ongoing. The tournament was scheduled to be held in Queensland in the mid-year school holidays, however this did not occur as a Covid outbreak hit QLD andVictorians were restricted from travelling. As a result, the games were spread out over a number of weeks in Melbourne.

With masks worn and Covid protocols in place at dinners, meetings and surrounding all games, there was not much room left for anything in the minds of players other than football and Covid. There was slight disappointment that the games were not held in Queensland, however by this time there was an immense understanding amongst all levels of the AFL that it was critical to just get in as much football as possible and eventually the QLD side joined the rest of the teams in the Covid safe Melbourne bubble.

With players finally able to connect with others across the state and nation, the Vic Country team came together to claim the title of National Champions with a 3-0 win/loss record. Led by AFLW legend Melissa Hickey, the group took convincing wins against cross town rivals Victoria Metro as well as South Australia and Queensland. 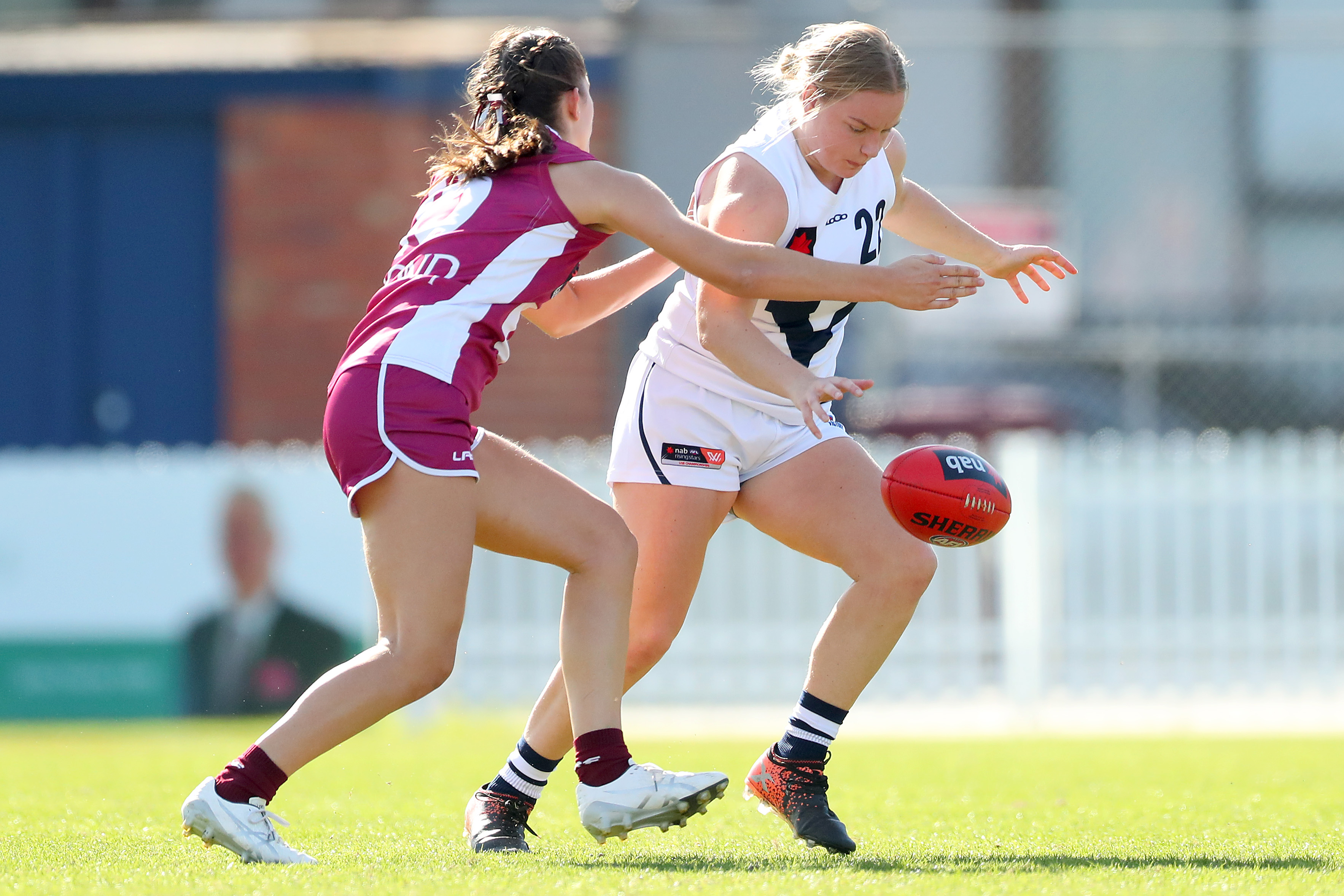 Renee Tierney of Vic Country kicks the ball during the AFLW U19 Girls Championships match between Vic Country and Queensland. (Photo by Kelly Defina/AFL Photos)

Playing at a national level was pivotal for this group of girls who didn’t get the chance in the previous year. It set the stage for the standard of young female football in Australia and highlighted the talent that is emerging from state level programs.

Following a big first half of the year many young girls turned to either establishing themselves in VFLW programs, or their local clubs. Taking their talents to the next level the VFLW allowed for greater exposure to young footballers looking to get drafted in 2021, while others looked for a physical and mental break.

Leaning on their local clubs many players returned home to established the connection to their football community that was severely missed. While restrictions remained and there were no spectators allowed, the spirit of local footy lived on. Being socially active and involved in the game restored the passion for many who missed the opportunity previously because of Covid.

Alongside this, the VFLW season had survived majority of the year with minimal disruptions. Their greatest challenge occurred towards the end of the season. With the first two rounds of finals played, Geelong was set to face Collingwood in the Grand Final. However, the match was post-poned due to another lockdown in Melbourne grinding the season to an abrupt halt.

Messages received by the clubs from the AFL claimed they had every intention to get the game played despite the standstill. The players continued to maintain hope and continued to train where possible.

The uncertainty surround the resumption of the season was mentally taxing on a number of players. Many wondered whether or not they should keep working as hard as they had been, or allow for time to rest and recover. Players became lethargic and negative about the situation. This was especially tough for the AFLW girls involved who were set to start their new pre-season in close to a month.

Unfortunately, the Grand Final was cancelled due to the continued extension of the Melbourne lockdown. Similarly to 2020 all state and community football was also then abandoned. A disappointing result for not only players, but clubs, competitions and the AFL alike.

There is much hope however for the 2022 season with the slow return to normality for Victoria. Having completed a positive AFL season all we can hope for now is that the AFLW women prove to have an equally successful year, with state league and local football to follow.

We have already seen the successful resumption of competition in Victorian with the recent completion of the AFL Blind and Wheelchair Football seasons.

We now look forward to a highly anticipated sixth season of the AFLW competition, and hopefully this will set the tone for a fantastic season of football in 2022 from the elite game all the way down to grassroots footy.