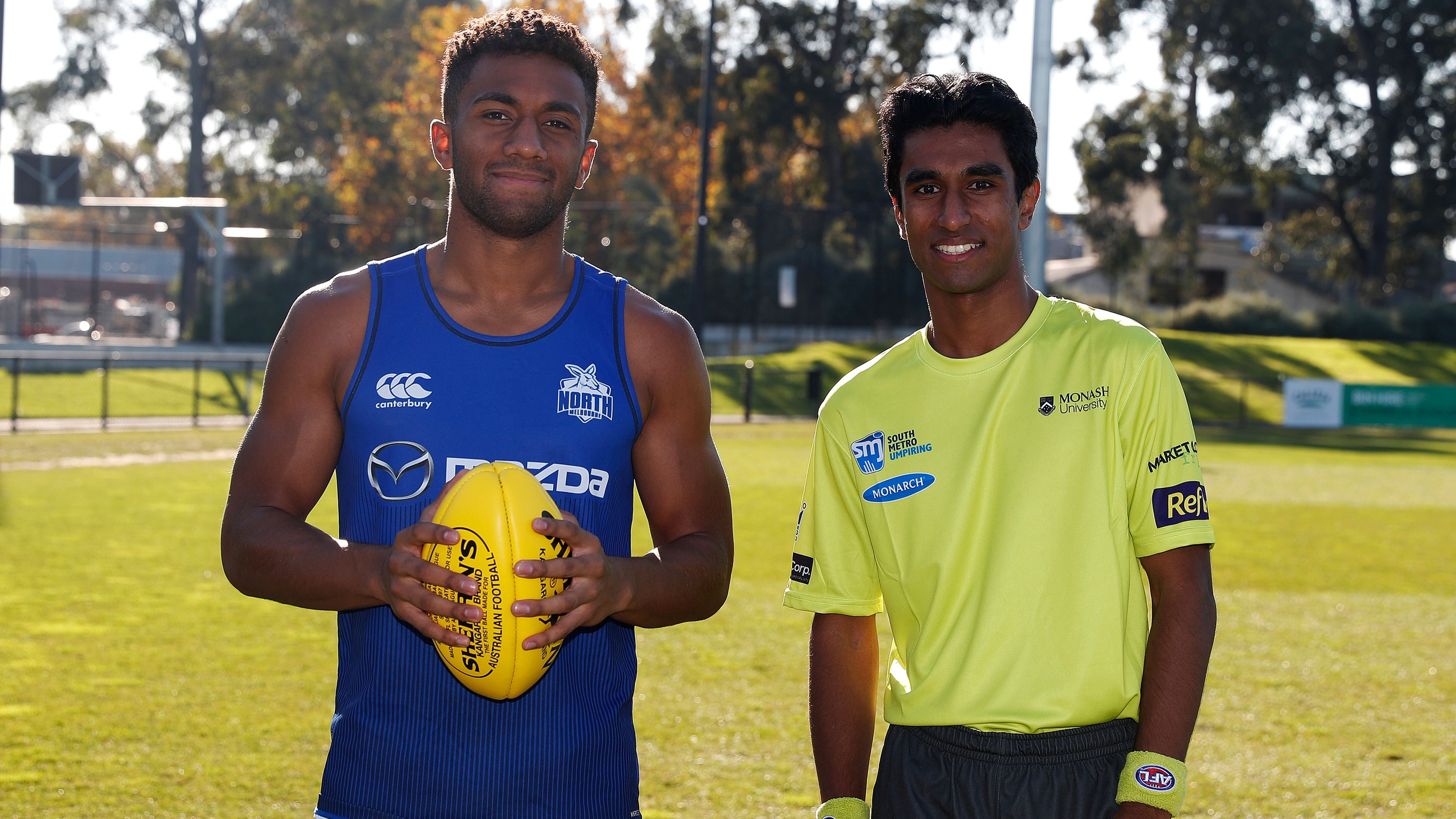 Atu Bosenavulagi and Ryan Mann have taken different pathways to rise through the ranks in football, but share a clear common pride in their Fijian heritage.

Bosenavulagi, 20, has impressed in the early stages of his North Melbourne playing career since crossing from Collingwood at the end of last year, while Mann, also 20, has progressed to the VFL Umpiring Development Squad.

Bosenavulagi is a rare example of someone born overseas making it to the AFL. He moved from his birthplace of Fiji to Melbourne at an early age and like so many athletic youngsters with a Fijian background, he was drawn to rugby union. His Australian football journey only started when he was nearly a teenager, with the Caulfield Bears.

"I probably got involved (in Australian football) when I was around 12, and then by 14 I started taking it more seriously. I was playing rugby at the same time.

"Eventually I had to choose one, it was a hard decision, but I enjoy footy. There are more opportunities here, too, with AFL being a lot bigger in Melbourne, so I saw the opportunity and I fell in love with the game."

Mann was born in Australia to a Fijian mother and like so many kids in suburban Melbourne, started out in the sport by playing Auskick, before moving onto junior club footy in Clayton. But when he finished school, a friend encouraged him to give umpiring a go, so he had a crack.

"I umpired with the SMJFL (South Metro Junior Football League) and SFNL (Southern Football Netball League) for three years, and started this year at the state league level, doing some NAB League girls and VFLW, and that's been fantastic.

"They're all super fit, so they keep me honest, but it's good. I've loved it and wouldn't give it up for the world."

Both young men feel a sense of pride in seeing other Fijians involved in the game, whether they're players or umpires. Clearly a former player who is a current AFL umpire has made an impression on both of them, as has an eye-catching West Coast ruckman.

"It's good to see other Fijians involved in the game through umpiring. We have David Rodan, who is a goal umpire as well," Bosenavulagi said.

"Getting more Fijians involved in the sport is a good thing, so I'm trying to be a beacon for others." 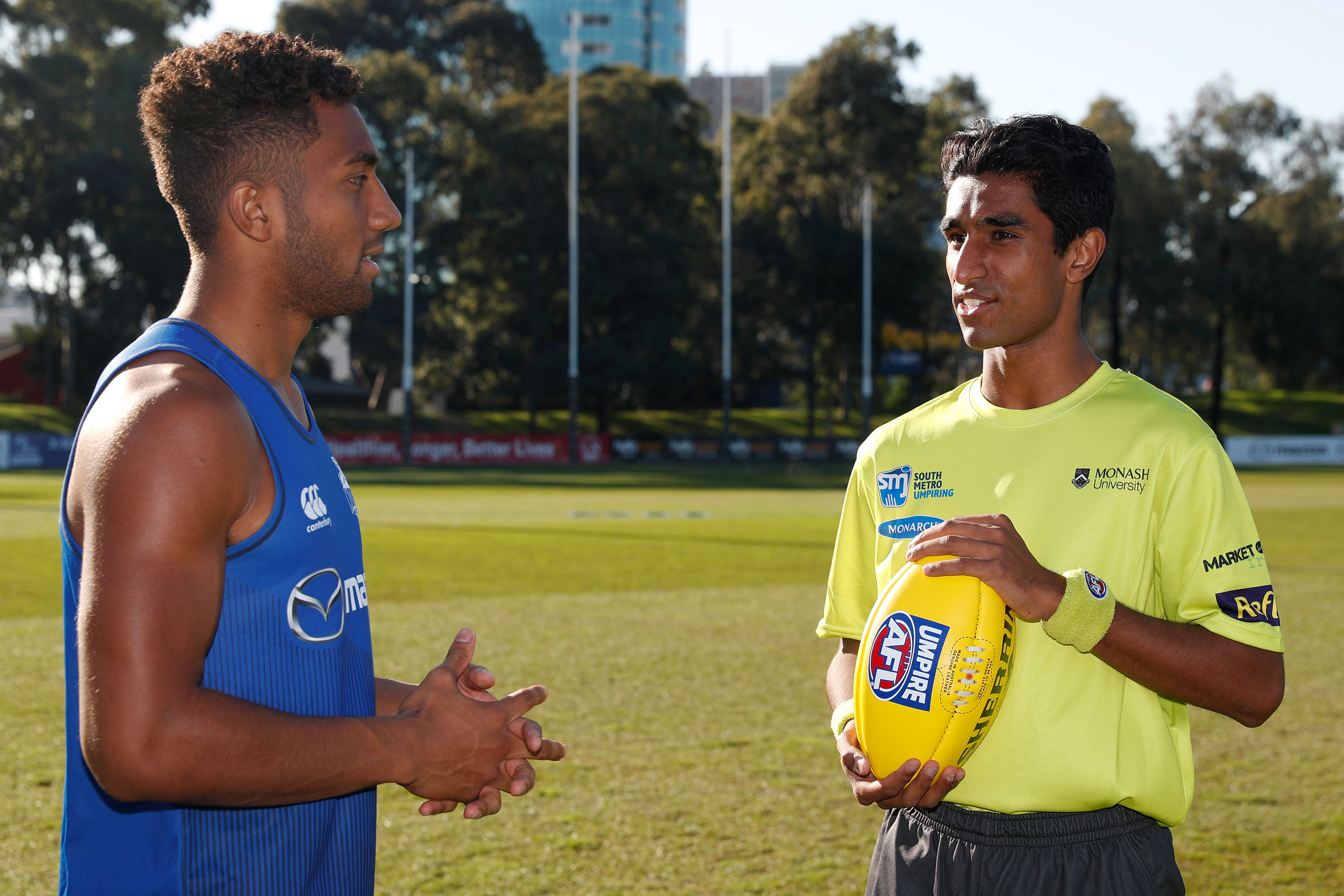 Mann's perspective is similar: "We know David Rodan is a goal umpire in the AFL. Nic Nat is a pretty big name, and Atu is coming up through the ranks, only young still, but it's fantastic to see the Fijian ties with the AFL."

The pair came together to meet at the Kangaroos' Arden Street base as part of Community Umpiring Week, put on to highlight the importance of umpires across all levels of the game.

Bosenavulagi acknowledged that respect levels between players and umpires grows the closer you get to the elite level.

"Umpiring is really important. It's good to see it expand and have boys and girls, all ages, and definitely all backgrounds getting involved. Seeing Ryan coming through is brilliant. 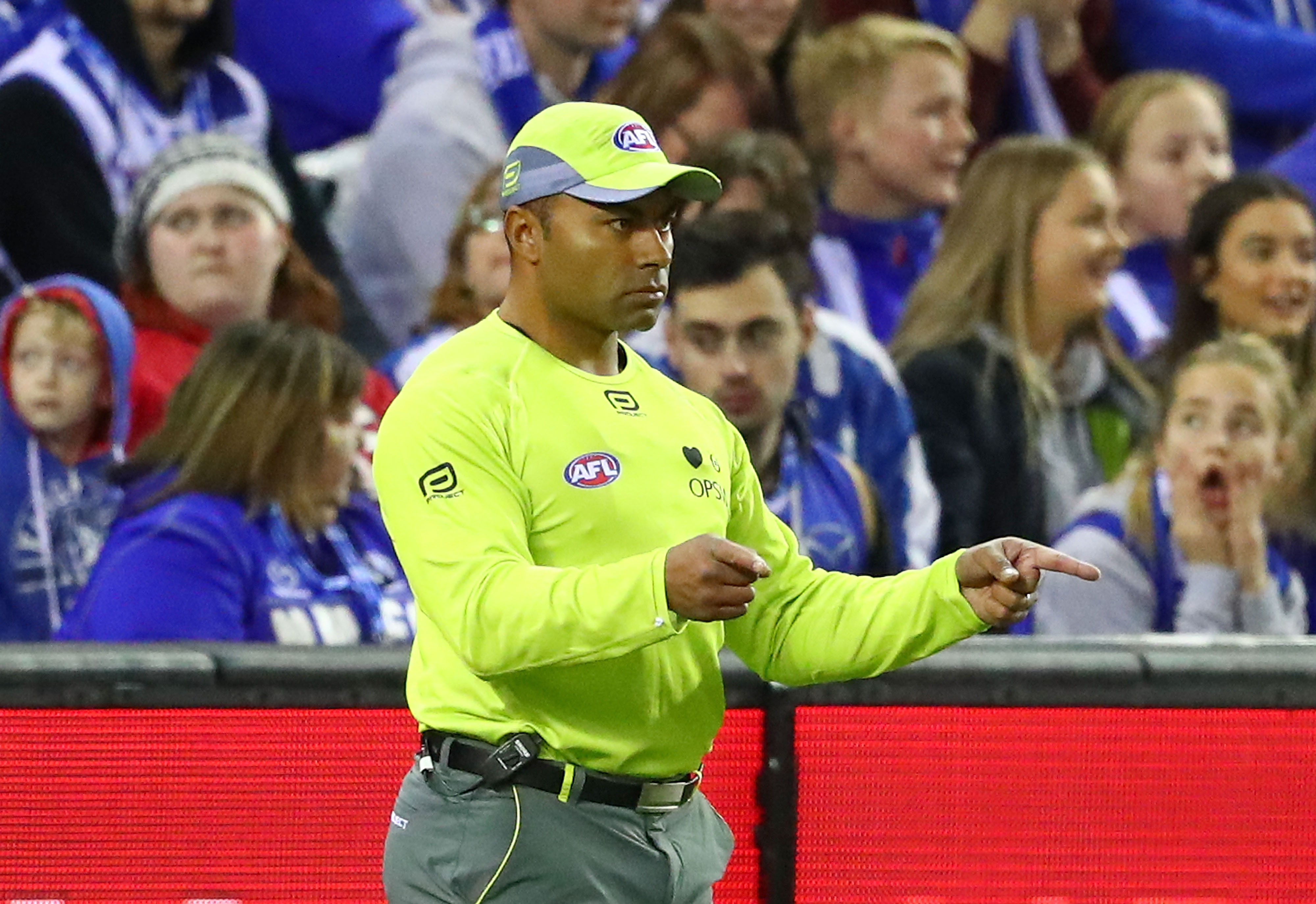 "As you get older and at the elite level, the relationship between players and umpires is more respectful. Umpiring is not an easy job and I personally respect umpires a lot," Bosenavulagi said.

For Mann, he encourages people to consider umpiring as a way to get involved in the sport.

"It's super important to highlight the role of umpires. Obviously, without umpires we don't have a game, so putting a bit more respect around umpiring is important.

"Umpiring is a great way for young kids to get involved in the game, and if you want to stay a part of the sport, like me, it's a fantastic option. There are a number of disciplines – boundary, goal, field – to pick from," Mann added.

Anyone interested in finding out more about umpiring can visit umpire.afl.