AFL stars umpire with the kids 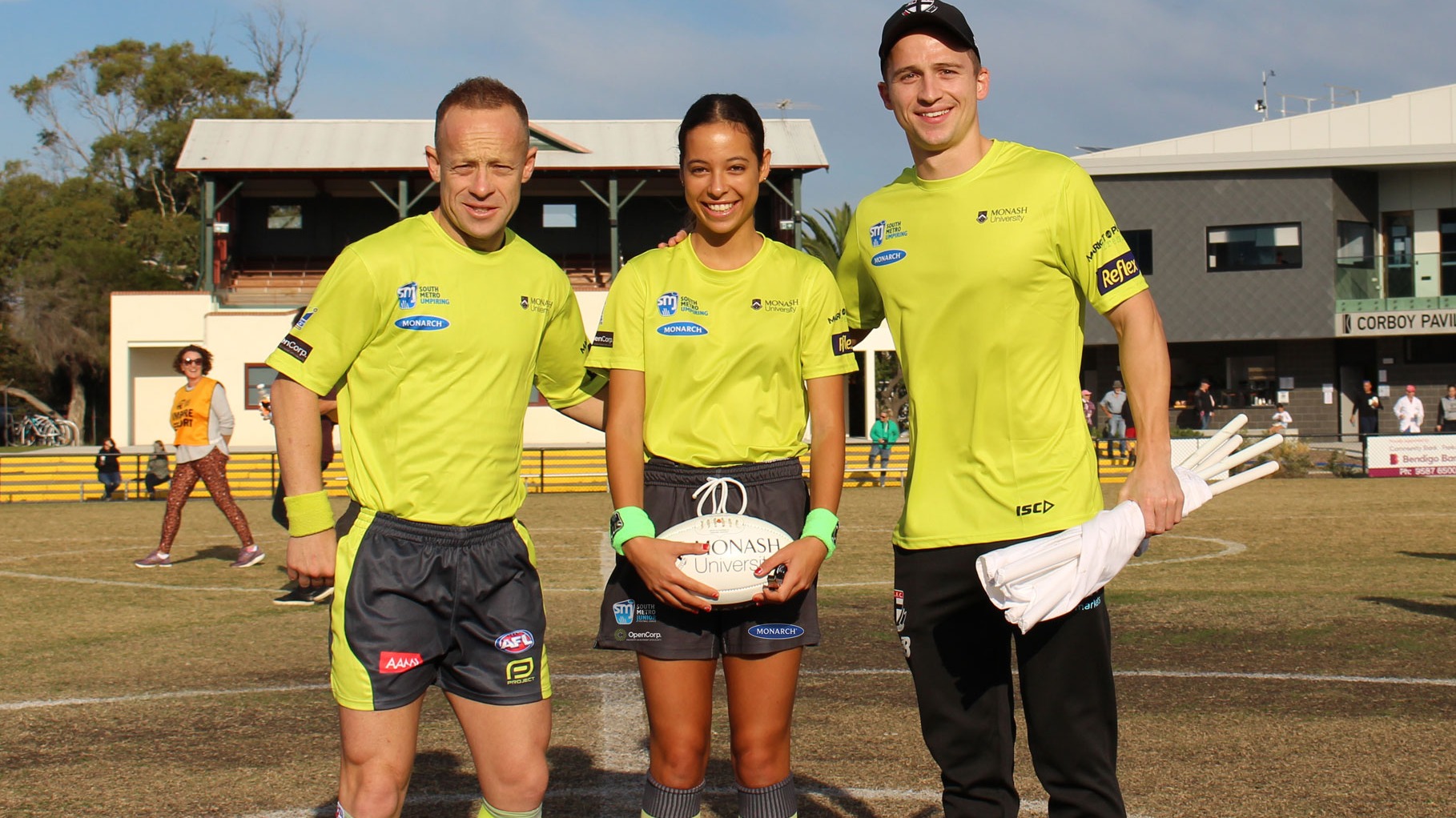 Over the weekend clubs and leagues across the country celebrated 'Community Umpiring Round', recognising those who put in hard work on the boundary, in the goals and on the field.

There was plenty of surprises in store for Sunday, with two AFL stars visiting Mentone Reserve.

Ray, who went onto umpire the Essendon-Carlton AFL match at the MCG later in the day, was accompanied by St Kilda midfielder Jack Billings, who took up the role of goal umpire, with the Monarch SMJFL Umpire Academy’s very own India Isaacs alongside Chamberlain as field umpire. 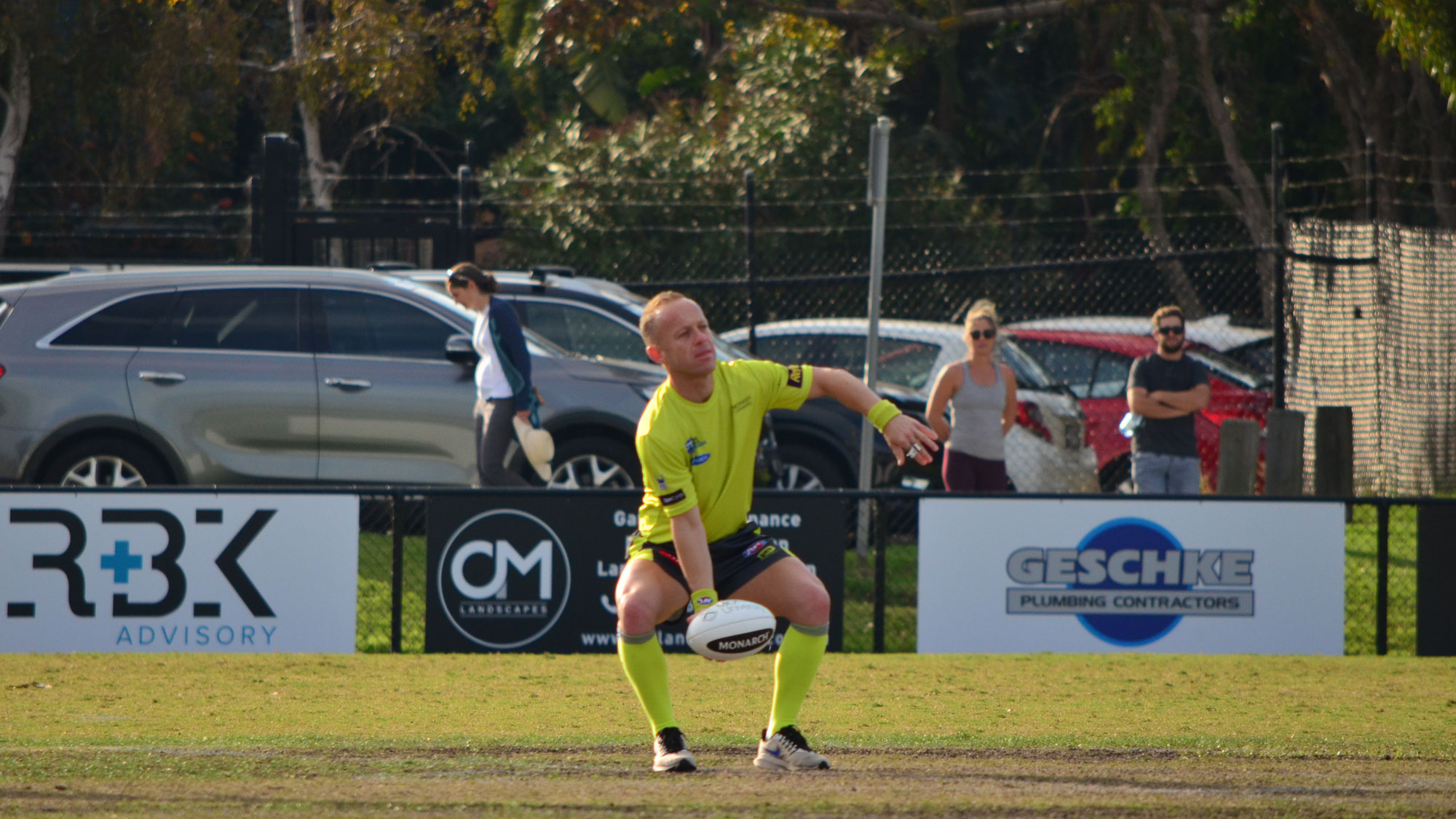 Ray Chamberlain in action umpiring an under 13 SMJFL match in Mentone, Victoria

“I always love getting down to local footy, especially the juniors,” Billings said to SMJFL Media.

“It was a good game of footy, and I did my little part as goal umpire down one end.” 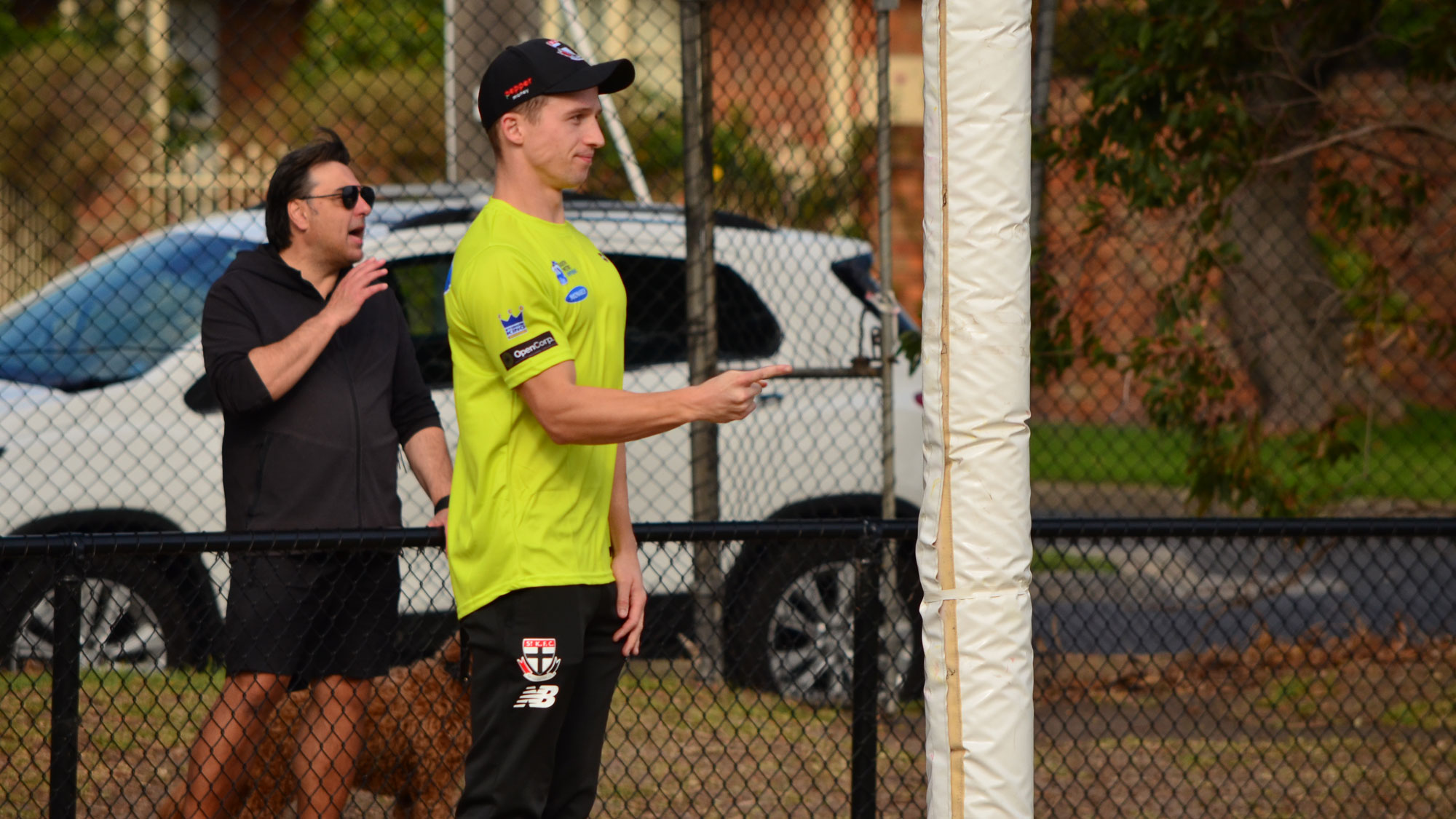 Billings said he recognized the value umpires bring to the game.

“Without them there wouldn’t be a game,” he said.

“They do a great job umpiring the contest [and] it’s a very tough gig though.”

“They do their best to protect the players, which I think in today’s game is the most important thing and will continue to be the case,” he said.

Billings said it was a great to experience a game from an umpire’s perspective,

“It was great to experience what it’s like today though,” he said.

“You’re umpiring two sides so whichever call you make, there’ll always be one team that’s not too happy,” Billings said.

“It would certainly be very challenging but like I said, it’s also a very important job.”

SMJFL Umpire Academy umpire of four years India Isaacs said it was an “awesome” experience to take to the field with Chamberlain and Billings.

“I received heaps of really good feedback and communication.”

It was a special morning for Isaacs as Chamberlain took her under his wing and mentored her throughout the game.

Isaacs was fortunate to receive a special gift from Chamberlain at the end of the game – an autographed AFL Umpire shirt from Ray himself featuring his AFLUA Heritage Number, 401, plus a special message for India. 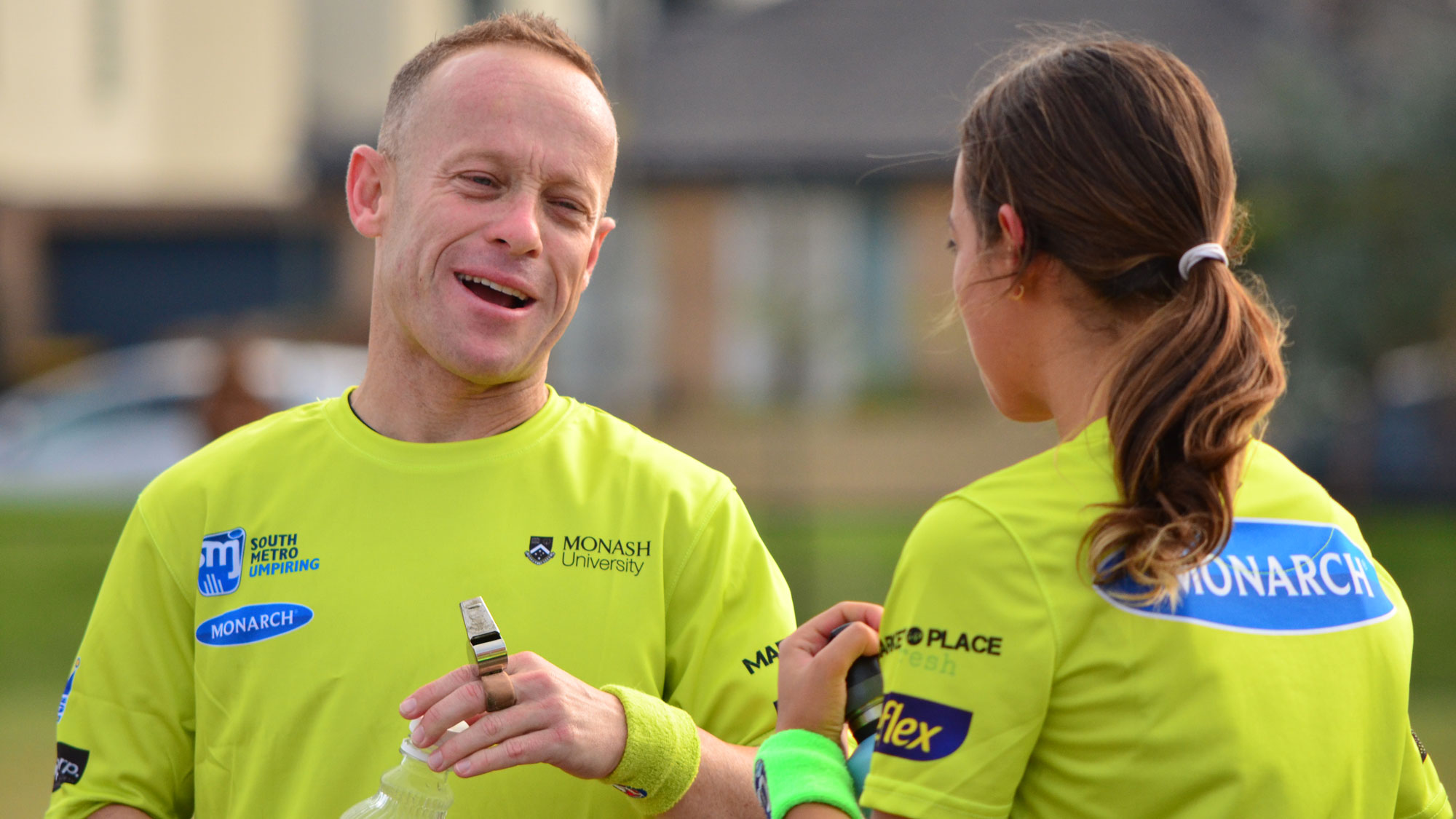 Isaacs was hot off another special umpiring event, with Monarch SMJFL Umpires attending the Richmond and Western Bulldogs hit-off on Friday 30 April.

Five umpires from the Monarch SMJFL Umpire Academy had the opportunity to warm up with the AFL Umpires, experience their match day routine and umpire the AusKick kids at half time.

Isaacs said the experience was “surreal”.

“I was on TV which was pretty cool, and I got the opportunity to chat with other umpires as well,” she said.

“It was a really rewarding experience.”

Isaacs encouraged SMJFL kids to give umpiring a go.

“Immerse yourself right into it,” she said.

“Go to trainings, watch the games, really get fully into it and enjoy yourself.”

Anyone interested in finding out more about umpiring can visit umpire.afl.

This story was originally published on the SMJFL website: https://smjfl.com.au/afl-stars-umpire-with-smjfl-kids/ 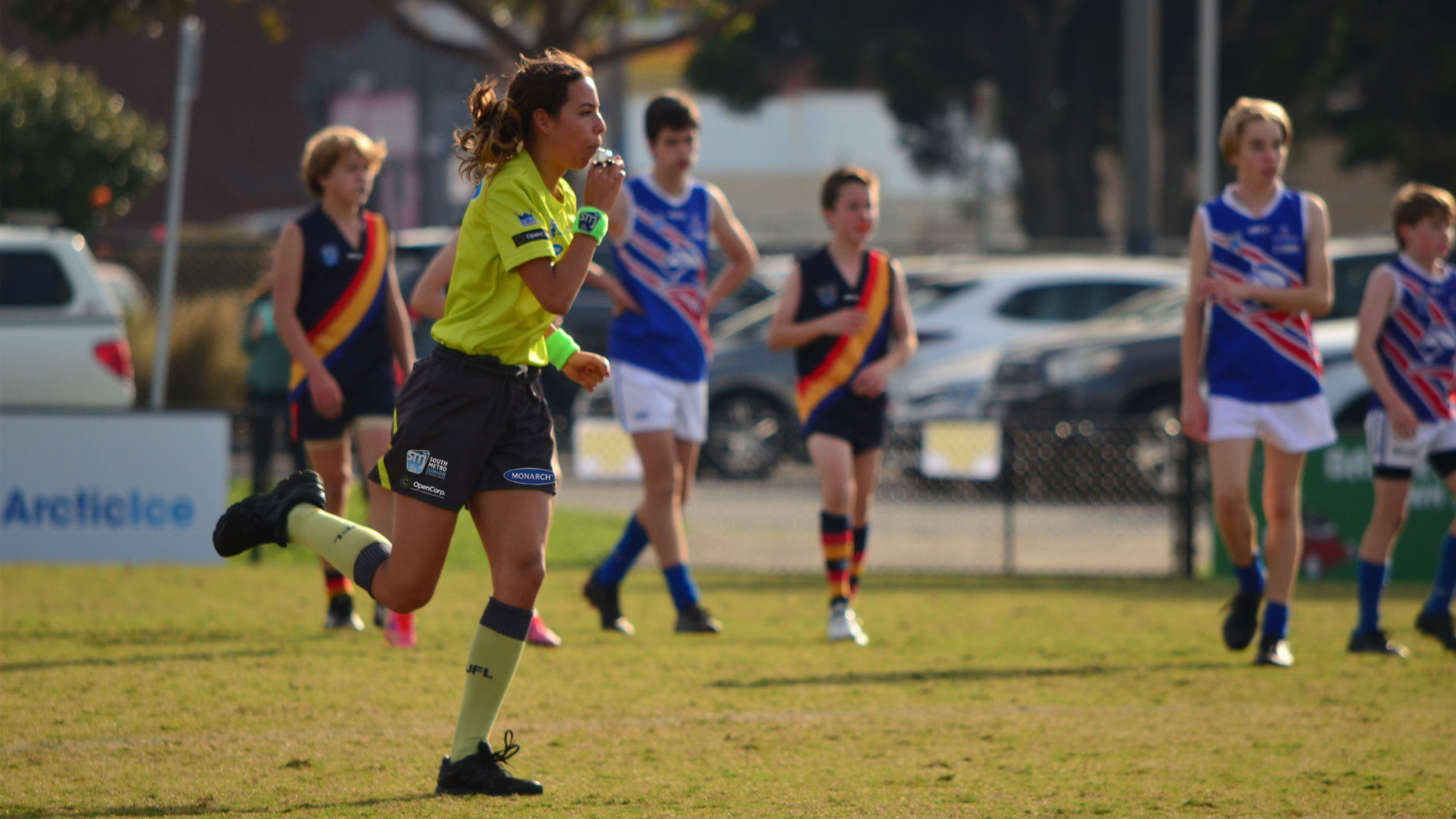 India Isaacs has a bright future in umpiring